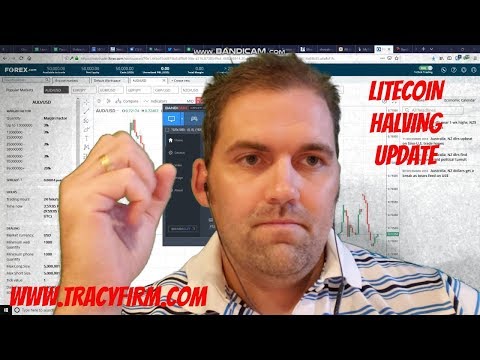 So today is Litecoin Halving Day, and for those of you who aren’t aware of the concept, it is the day upon which the block rewards for crypto Litecoin miners are halved, cut in half, and as a result … well, there’s two things. One, there’s this expectation that because conceivably scarcity will occur because less Litecoin will be mined, the price should go up, and I believe as of this morning it had gone up, but that is somewhat illusory. This halving has been announced some time ago, and no, just like the bitcoin halving that’s going to occur next year, right, it’s already known. Just like the real markets, right, and I say real stock markets, and the like, that information should already have been priced into the price of Litecoin.

But I had an interesting call today which prompted me to do this video from a Litecoin miner, and the question becomes it’s no longer profitable with the reduced block reward for me to continue mining Litecoin, right? Too much energy, too much cost versus the block reward now being half of what it was and the price being as it is, right, which conceivably at some point maybe it gets higher and it becomes profitable again. But for purposes of today it’s not profitable and is there legal recourse? Right? And I’ve kind of touched upon similar things with respect to forking, right? And this is a lot different.

I look at it like this is their legal recourse and you know, Litecoin, unlike Bitcoin, Litecoin has the Litecoin Foundation. There’s a sponsor, in theory there’s somebody to actually litigate against if you are so inclined to do it, which for reasons I’ll state here and it doesn’t really make a lot of sense, but no one’s induced anybody to mine Litecoin seemingly, right?

It’s more or less a voluntary thing and I view having as more of an inflationary tactic, much like what you see with interest rates with the dollar, right? They go up, they go down, they’re set by the Fed and it’s just to manage inflation, right? It’s to managed the value of that dollar, what that dollar can purchase effectively and halving has the same impact, has the same concept, but to suggest that I was mining and now it’s unprofitable and I can’t continue with it, I want to go sue somebody, it doesn’t really play out because there’s no inducement right? Now if you had a scenario where you were mining and Litecoin had specifically induced you on the promise of earning a certain block reward and failed to mention these halving scenarios, that may be one thing, but people who voluntarily mine or mine for profit, right, there’s nothing that can really be done recourse-wise with respect thereto.

Moreover it’s coded in right? So, in theory you knew about it. Now as far as individuals who were part of mining pools, right? Is there something there? It’s a little bit different, right? It’s a little bit different. It depends what the representations of that mining pool were to you. Right? If those mining pools promised you something that was illusory, then you can always litigate. You could always litigate. But for the miner itself, who now finds Litecoin to be a nonprofit, Litecoin mining to be an unprofitable venture, unfortunately there’s no recourse and you know, for what it’s worth, I think halving does make some sense, right? I feel for anybody who is mining and now finds it to be unprofitable, right? I would never want to see that for anybody. Right? It’s just a business like anything else. You don’t want to see anybody’s business go south. But you know, mechanically if we want to take crypto and sort of put it on par with currency, this is the effective way to do it. Right?

One of the effective ways to do it because there’s really not interest rate driven. So unfortunately with halving, there is no real legal impact, right? There’s no real impact. Check on my video about forking. That may be a different thing. But as far as halving goes, I think you’re dead in the water from a legal perspective if it does in fact take your mining operations into the red. So if you have any questions about it, or if you have a scenario where you’re part of a mining pool or anything like that, be sure to reach out to me at adamtracy.io. Happy to answer any questions that you have and I’ll talk to you later.