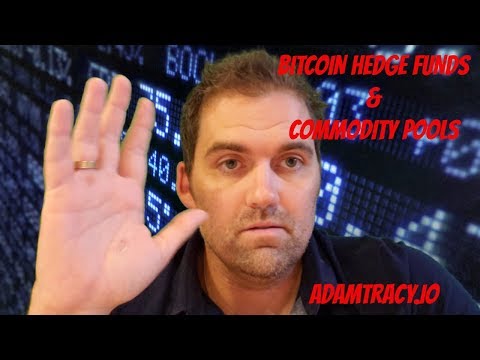 So, lost in the debate over the Bitcoin ETF is the true legal status of Bitcoin. Right? And the SCC has garnered… There’s been a lotta discussion and dialogue regarding the SCC’s action in not allowing the Bitcoin ETF. But much like the Bitcoin Future, which I spoke about previously, there’s a very valid reason for it, right, the pushback from the SCC, and that’s to the fact that the end of line spot markets, meaning the cryptocurrency exchanges, are unregulated, right? They’re state money transmitters and money service businesses. Those aren’t regulated. Those are a far cry from regulated securities exchanges, right? And so, that’s why you see so much manipulation in- within the market. And where this manipulation within he market that can’t be policed, why you’d have a regulated product like an ETF is questionable, right? It makes- makes a great deal of sense.

But what’s hasn’t really been brought up in its pertinent, for especially hedge fund promoters for Bitcoin based hedge fund promoters, is the legal nature of Bitcoin, which is a commodity, right? For, you know, five years plus, Bitcoin has been a commodity. It’s been anointed to be one by the CFTC. In fact, all convertible virtual currencies, basically all cryptocurrencies have seemingly, you know, been roped in by the CFTC. Now you have this internal sort of push and pull with the ICO crowd and the SCC sort of taking the lead on enforcement. And people tend to think that the SCC has- has jurisdiction over all cryptocurrencies but that’s not the case. Right? It’s certainly not the case. Bitcoin, since the coin’s lip decision, has been a commodity.

And so, your Bitcoin ETF is something called a commodity pool. Right? And a commodity pool is basically a mutual fund where the underline financial product is a commodity or futures contract. Right? And the obvious objective and purpose of going through the process of registration with the NFA, the National- National Futures Association, is leverage, right? When you pool investment, you can drive leverage, and you can conceivably make trades and financial positions that you wouldn’t otherwise be able to do on your own. That’s why people invest. And it’s a security at the level that, as an ETF, you’re buying shares of this ETF, right? You’re buying securities. But at its core, it’s a commodity pool.

So, relating back to hedge funds, and many of my clients who deal in Bitcoin and are prop traders, arbitrage traders of Bitcoin, and even some OTC traders depending on how you’re structured, you may in fact be a commodity pool. Right? And that’s because the underline product that you’re dealing with is Bitcoin, which is, again, a commodity, not a security. And that’s lost so often, and you see a lot of hedge funds run into problems because they’re not registered properly as a commodity pool. And that registration process has some exemptions, right, to it, but they’re very small. It’s not like a, uh, investment company act exemption like a 3- 3C7, or- or 12, that you see where there’s broad exemptions for, like, let’s say, less than 100 investors, or something to that effect.

The- the exemptions, the three exemptions, De Minimis Exemption, the investment club exemptions, they really don’t apply, right? They really don’t apply to any real, uh, hedge fund, right, that you’re going to run. So, when you’re structuring a Bitcoin based hedge fund, what you are structuring is of course a hedge fund in structure, in corporate structure, and in financial parlance, right? In terms of having a, you know, an in- uh, a management company having the separate, um, uh, fund company, fund limited partnership typically, or LLC typically, that would own the Bitcoin, right, and be managed by that management company. But that fund is in of itself a commodity pool. And you have to register as a commodity pool to be legally complied because again, the underline contract is Bitcoin. Same goes if you’re running Bitcoin Futures.

Now if you were investing in security tokens, right, those are decidedly securities. And presumably, you wouldn’t have to register as a commodity pool. But, um, it’s something to consider because as your fund gets bigger, and you go through the machinations of having to register as an investment company act, company or fund, it- that issue’s gonna come up, right? The issue of whether or not you’re also registered as a CPO or a commodity, uh, commodity pool. And then, the individual who promotes that commodity pool is a commodity pool operator, which is separate registration of itself. So, it’s something to- to consider and it’s in- in the press, and in just the general community. Like, there’s real, I think, misunderstanding of Bitcoin and this sort of willful ignorance regarding the fact that Bitcoin is a commodity. Because you see so much activity by the SCC, but that activity is really based on the context of ICO’s and tokens which re- resemble securities, whereas Bitcoin is squarely a commodity.

So, something to consider, um, you know, if you are a hedge fund that actively trades Bitcoin, um, as a, you know, as any substantial part of your portfolio, that CPO, CP registration is- is undoubtedly some- a direction you have to go. So, hit me up. You have any questions, happy to kinda walk you through the process, let you know what you have to do. It’s [email protected], T-R-A-C-Y, .IO and I’ll talk to you later.