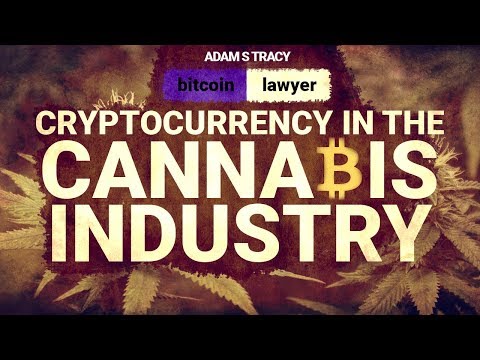 So the cannabis industry’s been great because it was really the first industry that cryptocurrency was really widely accepted and used, and that stems from the rather tenuous legal position of the cannabis industry on a whole. So, of course, you’ve got states such as California, Colorado, Illinois, Michigan, that have allowed medical usage of cannabis and sanctioned the growing, distribution and ultimate consumption of it. And then you’ve recently got the Colorado’s and California’s that have legalized recreational marijuana. And then across states in general, you’ve seen a toning down of marijuana and cannabis related enforcement to include ticketing as opposed to arresting and things of that nature for cannabis related crime. So there’s been a general softening, but the reality is, at the federal level, cannabis still remains illegal.

And, as a result, this has had an implication on banking, because banks are hesitant if not outright unwilling to deal with cannabis related ventures, even if they are licensed in the state that they’re licensed in. Because there’s implication for that, and inadvertently, for instance, a dispensary that is banking through a national bank such as a Bank of America, could, whether they’re intending to or not, commit wire fraud or even money laundering because the source of those funds, the sale of cannabis, is still illegal. So, when you look at it, cryptocurrency was a natural fit because things like Bitcoin, Doshcoin, provided a necessary economy that these coins continue to thrive in to this day.

And under the Obama Administration, you had something called the Cole Memorandum, which basically said that federal enforcement wouldn’t occur against the individuals involved in licensed and sanctioned activities within any given state. So basically it said if you were sanctioned, licensed under a state, and doing one of the functions, growing, selling, or you were using, that the federal government would not pursue prosection. Now, that has since changed where the Trump Administration and Attorney General Sessions has parsed pieces of that Cole Memorandum to broadly expand the reach of federal inquiry what would otherwise be state level legalized cannabis operations. So that’s had a chilling effect on banking and, as a result, you’ve see things like not only Bitcoin but obviously Doshcoin go much higher because now the need to rely again on cryptocurrency has increased and it’s signaled that at least for the remainder of this administration that you’re going to see probably a tightening of banking regulations as it relates to traditional banking for cannabis related ventures, and thus the need to use cryptocurrencies such as Bitcoin and Doshcoin.

So it’s an interesting play out how that’s going to actually happen with the tightening of the regulation and what effect that will have on state level licensed cannabis operations. But I tend to think, and I would advise and do advise many of my clients who are in the cannabis space, to rely on cryptocurrency, especially Bitcoin, something that’s a little more liquid, a little more stable, in the near term, as opposed to banking or unwittingly banking and you’re banking under the pretense that you’re not doing cannabis related activity because, whether you are in fact committing a crime, committing a felony, through the use of the wires of the United States, which is wire fraud, or money laundering, which effectively can be depositing money in bank accounts saying it’s something else, it’s really just not worth the risk to the extent you could find a bank to take your business to begin with.

So, to the many that reach out, feel free to call me in confidence. Visit my website, tracyfirm.com. I’m happy to answer any questions you have on this very topical subject. So I’m Adam Tracy. Talk to you later.