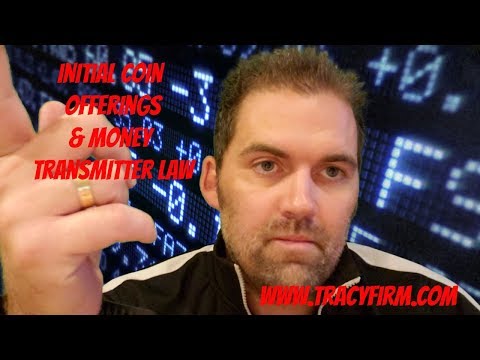 Then in May, they refined… FinCEN refined its, uh, delineation and came up with, among other things, which I’ve talked about here before, but one thing I haven’t really touched on is the impact of initial coin offering, initial exchange offering companies and the intersection with money service business registration. And in May, FinCEN stated in no one’s certain terms that if you were an ICO company or planning on doing an ICO, that the process, okay, of exchanging value, right, whether it’s fiat, bitcoin, Ethereum, for a virtual currency or a convertible virtual currency, as- as FinCEN likes to call it, makes you a money service business, makes you a money transmitter, to be- to be precise.

It’s sort of like incorporation, right? It’s one thing to go to legal zoom and get your company incorporated in Wyoming for $200, but that alone doesn’t make you a corporation. Having bylaws, having initial minutes, all the corporate compliance documents that go with it, that actually makes you a compliant corporation. So much like an MSB, the whole concept of registration means nothing if you don’t follow it up with the actual letter of the law, which is this scheme of AML compliance.

So… and the reality is, you know, most ICOs are doing some level of AML, and that’s a good thing that you really should do that because you have like OFAC issues, which you can never really get away from, right? Those are sort of mandatory. And then you have this [inaudible 00:03:28] of KYC/AML that you just have to do, right? That you have to do no matter business you’re- you’re… even my business, that you- you have to sort of know who you’re dealing with, to some degree at least, right? The framework’s different obviously when you’re a money service business but it’s a real thing, right? You need to do it.

But not as difficult as you may think because you’re not really dealing with cash. And a lot of the AML, SAR reporting, STR reporting, stuff like that, deals with currency, like hard currency transactions, which you’re not really going to encounter in- in any sort of ICO, IEO. So you have that.

You’re transmitting money or exchanging money to some other value for a fee, right? And I use money sort of going back and forth between con- convertible virtual currency, cryptocurrency and dollars, right? But you’re providing this transmission, think of Western Union, right? Or you’re providing this exchange, think of Travelex, or you’re doing it for a fee, right? You’re providing a service. You’re not in this like as you would be in an ICO accepting the investment and selling, in turn, some form of cryptocurrency, right? There’s a very, very, very wide difference.

Now in the federal scheme, that exchange, right, that happens at the sale of an ICO token is enough to qualify you as a, quote, money transmitter. And you have to fit into these boxes and you notice… you’ll notice that if you ever go t- to register through BCA, BSA E-Filing as a money service business. There’s all these different qualifiers, right? Foreign exchange, money transmitter, seller of prepaid checks, different things that you have to fit into these boxes, right? But these boxes are way broader at the federal than there at the state level.

So, you know, to answer the question, I don’t think it’s necessary to register as a state or need to register as a state level money transmitter to conduct an ICO. I just think it’s over broad, and you’re not acting as that service provider definition that all of these individual states sort of fall under, right? Now if you’re an exchange, okay, or you’re just simply selling bitcoin like in a coin based type model, then yeah, I think it’s definitely necessary, right? Unless you’re not dealing with fiat, right? If you’re on sort of like the [inaudible 00:07:21] model, then you really can get away with just being an MSB.

But when you introduce fiat to it and you’re an exchange or an exchanger, right, like an ex… what you’d be deemed at the… in the federal scheme, on the state level, then it becomes different, right? Then you’re really just providing that exchange service, you’re not selling token as quasi investment, right, or, uh, you know, as in the utility token case as sort of a use case, something like that.

So if you have any questions, obviously, hit me up as usual, comment or email me, [email protected], and I will talk to you later. Thanks.