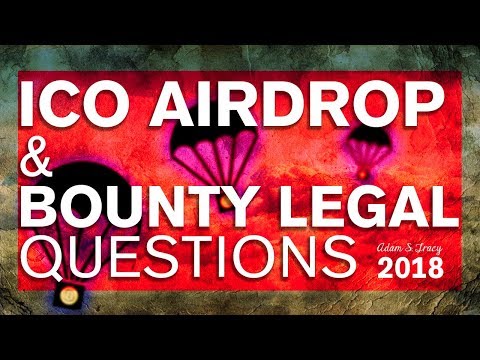 I’ve been getting a lot of questions lately about airdrops and bounties, and whether there’s a legal issues that surround both. And, of course, obviously there is with anything. But, let’s assume the worst case scenario. If you want to take that from the perspective of all of these ICO tokens being securities, then what do you do? Like, are you engaging in an offering of securities, and is there a proper exemption if you’re doing like a bounty? There is, in theory. Rule 701 says that pursuant to a written agreement, an issuer can issue securities in exchange for services. Right? And, that can extend to consultants and advisers. So, you think about like the pure start-up scenario, where you have a bunch of like Kids working for you, and you pay them in stock, right? I, myself, accept stock all the time. Right? It’s just sort of the way that you are compensated when you work with early-stage ventures. They take token. So, it’s kind of a common way to do it. The 701 exemption is used repeatedly. And so, you could apply that to airdrops and bounties. And, I think there’s some nuance to it.

1) The 701 requires a written agreement. So, that written agreement doesn’t necessarily have to be a signed, sort of, counter-party wet signature agreement, but you have to have some sort of writing that evidences what compensation you’re receiving, in exchange for doing a certain service. So in this case, you know, even something as simple as your Bitcoin talk announcement thread would be would be sufficient.

2) The services have to be not related to raising money. So, when you think about the utility token contacts, what you have to be very certain of and very clear about in your announcements and how the bounties run is that the sort of promotion, the social media, whatever people are doing to earn these tokens, are doing it to promote a product or service, as opposed to promoting the ICO — the sale of that token. So it’s very, very clear under law that it can’t be for fundraising. Likely, the way most of these go, your social media promotions are really just promoting whatever network or platform you’re creating.

3) Finally, especially in the context of the consultant or adviser, which all of your bounty and airdrop participants are ultimately going to be, (that’s really what they are — consultants or advisors just on these very small micro transactions) is that they can’t be engaged in any sort of securities promotion. Right? And this is sort of like a relic of the penny stock days, where you would pay penny stock promoters to go out and promote the stock, but you pay him in stock. Well, they closed that loophole. So, going back to point two, your consultants and advisors (the participants in your bounty) have to be very, very careful that they’re not promoting anything that’s particular to the issuance of these ICO tokens or the offering of these ICO tokens. And again, we’re coming from the perspective that all the tokens are securities, which I don’t believe they are, but, you know, worst case scenario — are you able to do it? And retroactively, if someone came in and said this token was, in fact, a security, then was it, in fact, legal to do the airdrop or the bounty?

And I think it is, under rule 701. What I’ve been able to, you know, ascertain both in my own involvement and involvement from other attorneys I’ve spoken to, it doesn’t look like there’s really, to date, been any action by the SEC that has focused on or even really paid attention to like a bounty program or an airdrop as it relates to the issuance of tokens. It’s been more focused on the ICO concept. But it is something to think about when you’re designing these, like what you’re actually paying people to do and especially if it’s social media marketing, what they’re actually promoting. Right? It has to be focused an overwhelming part on the utility. That’s the focus of these things. That’s how you have to approach these. Your marketing, in general, needs to be on the utility, not on the offering or the upside potential price appreciation of your token.