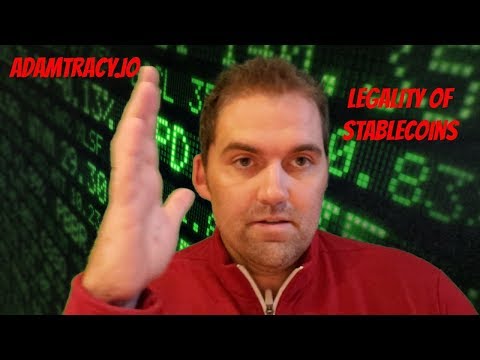 So more and more groups are moving to the stablecoin model, which is nothing more than a token that’s pegged to typically the Unite States dollar… movements in the United States dollar. And functionally, you could question why that’s important considering how liquid the Forex market is and why one would conceivably need to do that, but that’s neither here or there for purposes of- of today’s discussion, but it’s becoming increasingly popular. And you see a lot of, especially like exchange based tokens moving to that stablecoin model, presumably to give investors some degree of resolve that this token will maintain its volume.

But there’s some interesting legal implications for it. And, you know, the typical process is you would, an investor or purchaser, would send in fiat and the stablecoin will be minted and returned or simply, the investor would send in fiat and just receive the- the stablecoin. And so it- it kind of touches three areas of law, commodities, securities and money service business, Bank Secrecy Act law. So on the security side and what it resembles, especially if there’s redemption function, and by redemption function, I mean the ability for me to turn in my stablecoin token and receive, in kind, dollars back, right?

In that context, in the securities world, that resembles a demand note, right, a demand promissory note, meaning, um, I borrow money from you, you give me a demand note and at any time, I can come back to you with that note and demand repayment, right? And that’s with that open redemption policy, right, if you have that attached to your stablecoin, that’s where, from a security standpoint, you sort of start to resemble a security. And that’s without even touching any sort of dividend function or interest rate or anything like that, that you may attach to the- to the stablecoin. Um, it’s just that simple redemption makes it look or appear and function just like a demand note.

On the commodity side, that looks like a swap, right? It’s that open redemption function, it makes it look like a swap, which is, just as the name implies, basically an option to redeem for the underlying commodity, which, in this case, would be the dollar, right, or dollars as the case may be. So, um, you have some issues there and I think that relates to how you’re structuring your stablecoin and how that redemption works, if you even have it, right?

And then finally, third, you’ve got the money service business, FinCEN Bank Sec- Secrecy Act registration issues, which, you know, I’ve discussed before how, really, any ICO, according to FinCEN, as of May, needs to register as a money service business to legally conduct that ICO. And in the stablecoin, you may not do an ICO but that redemption function is sort of this ongoing continuing ICO, right? And you see that with some [inaudible 00:03:42] and some popular stablecoins, they don’t allow redemptions within the United States because what, they’re not registered as money service businesses, right? And they need to be because that exchange, right, that exchange of stablecoin to dollar or vice versa is acting as a money transmitter for federal law purposes, which would require registration as an MSB.

So, you know, these stablecoins, while good principle, trigger or could trigger a lot of laws. And it relates all back to the function of the redemption, right, and how that redemption works and if that redemption exists. So if you’re gonna structure a stablecoin, right, it’s entirely possibly to not have a redemption function, right? The dollar, for a long time, was pegged on gold and there was really no redemption function, right? I mean, you couldn’t necessarily go get the gold that it was- it was pegged to and then eventually, didn’t make any sense. We got off the gold standard altogether. Well, the same can hold true for these stablecoins, right? And you see, you know, claims that, like Tether for instance, had enough dollars to back its… the entirety of stablecoin but they burn through like three auditors and can’t get that- that claim verified, right?

So i- it goes back to not so much the concept of floating the stablecoin against the dollar or- or Euro dollars or whatever the case may be, it really comes back to that redemption and if it is in fact a security, right? If it is in fact a commodity, or both, which, conceivably, it could be, then all the flexibility that you have in trading and in being able to transfer goes away, right? And you’re gonna have a significant problem not only from a regulatory standpoint but from evaluation and functionality standpoint because no crypto exchange would be willing to take it, right?

No crypto exchange is going to take a security or a commodity, uh, b… I mean, a bonafide crypto exchange because legally, they’re not national security exchanges or alternative trading systems, which would allow them to trade securities, right? And that’s the number qualifier outside of paying the fee to getting listed on a crypto exchange to having that legal opinion that says, hey, I’m not a security, hey, this isn’t a commodity, right? And so with the stablecoin, especially with these redemption functions, you’re gonna run into that- that, um, that problem fairly frequently.

So, um, you know, to raise that create and mint these stablecoins, I don’t necessarily understand but I’m on the other side of the fence. Okay. It, uh, my opinion may not matter so much.