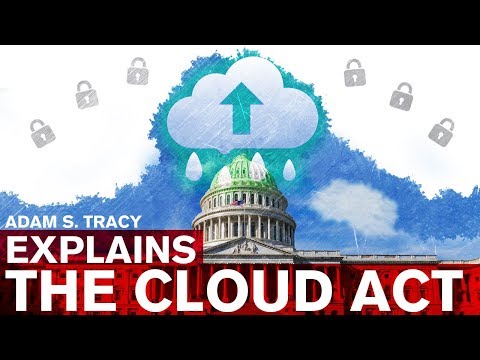 Cyber law expert and entrepreneur Adam S. Tracy explains the ramifications and impact of the Cloud Act on online businesses

So loss in the commotion around FOSTA and then also loss in the commotion about the spending bill, which nobody read but why are you surprised, is the Cloud Act which was included in the spending bill. And the cloud acts really scary, for not only anybody with an online presence, but even it relates to cryptocurrency and governments sort of diving into cryptocurrency. And you see this parallel as I do like where considering this you know this conceived breakdown or crackdown rather in United States about cryptocurrency, that people are going to sell offshore or do their business offshore. But this Cloud Act, which no one realized passed because it was lumped in with all the bunch of other, excuse me, shit, is pretty significant. One, the Cloud Act enables foreign police to collect and wiretap people’s communications from US companies without a warrant. Right? So that is a massive, massive Fourth Amendment issue. It also allows foreign nations to demand personal data stored in the United States, without prior review from a judge. Right? So consider if you have stuff on like the Cloud platform, that you that you store, right, how that can be easily accessed from foreign government. Third, it allows the president to enter into certain executive agreements. Right? So agreements by FIAT that allow foreign countries to seize data from your cloud storage, from your social media, whatever the case may be. And it finally allows foreign police to collect data without notifying them about it, right, whereas that’s a difference here.

So you’ve got this total breakdown of any Fourth Amendment right, and what’s scary about it is that you’re offering it to foreign powers by basically FIAT In This Cloud Act. And so, you know, you’re talking about Cloud storage, you’re talking about online, you’re talking about adult, you’re talking about crypto, you’re talking about payment processing, you’re talking about all these you know, gaming, anything, that’s like alleged gray area. Well legal or not, it’s still legal, but it’s deemed to be gray. Now, all these foreign governments now have this unfettered right, which is actually greater than what you’d probably find, by any sort of police force in United States. Right? Like in any in any instance, within the context of the United States, at least they have to get a subpoena. At least they have to convince a judge to do something. Like, the Cloud Act basically allows for the president to make deals, these treaties, with anybody, much like a tax treaties and judgment enforcement trees. But it also lowers the standard for foreign entities trying to obtain information from US-based companies and US based sources about US residents. So it’s really like frightening to a large degree. And it’s been largely overshadowed because it comes on heels of the FOSTA. And it was also just buried in this spending bill. Right? So it’s got some pretty significant implications.

But, I think in you know, especially like in the cloud storage space, its massive. So you know the implications are huge across the board, right, like for my crypto followers, it’s significant, because what you may think wasn’t information-sharing, right, when you go offshore now, could be subject to it. Right? Especially when you’re talking about like EU Nations, like common law nations, stuff like that. And then, you know, from like adult clients, things like that, I mean, you know you don’t know what the implications are. Right? Because the laws related to indecency are so wide and varied, and any one country would now have this unfettered access to your content. So it ostensibly could be a very frightening thing. But at a minimum it is something to watch out for. You know, any law is law whether they choose to enforce it vigorously is one thing. Right? And there’s majority of the laws on the books arguably that aren’t enforced. But neither here nor there, that’s terrible legal advice. And I’m telling you that, and an I’m attorney. So check out the Cloud Act, and be very of it. You have questions hit me up at [email protected]